Mamiya Rb 67 Professional S - a beast of a camera

April, 2019. 49 years after its premiere on the photography market, I decided to purchase a Mamiya RB 67. Whilst I already had experience with medium format TLRs (the WZFO Start-B), which we had acquired for a vintage wedding of one of my closest friends, and which sparked my interested in analogue photography, it turned out that the Mamiya RB 67 is a completely different beast. Capable of pictures rivalling modern digital cameras in look and detail. If you are interested in the results of photographing with such a camera, take a look at my night in Berlin or my first street photography session with this beast.

… is Japanese company, founded in the year 1940 (May) by the camera designer Seiichi Mamiya (間宮精一) and a financial supporter as Mamiya Kōki Seisakusho (マミヤ光機製作所, Mamiya Optical Works). With headquarters in Tokyo, and according to Wikipedia two manufacturing plants + a workforce of 200 people.

Its first product that brought fame to the company was the Mamiya Six (or Mamiya-6). A 6x6 rangefinder that folded - it ended up being a bestseller.

Mamiya also decided to invest in other fields of business such as fishing equipment, golf clubs, shafts, grips, and golf balls through various subsidiaries.

This (35 mm film cameras) is the type of camera everyone still remembers and is mainly considered being the full-frame equivalent of today, which has been introduced by Oskar Barnack, the father of the Leica, while finding a solution to heavy cameras. He took 135 film, which has mainly been used in cinematic film cameras to those days and engineered (~ 1913) a range finder camera around it. This later became known as the ur-leica. 35 mm cameras came in hundreds of types. From rangefinders like leicas, to single lens reflex, to point-and-shoots, and pinholes. Likely a lot of other variations too. You might find another blog entry of mine later about my two SLRs from another interesting Japanese Camera manufacturer called Yashica.

It is a much smaller format than the medium that is used by the Mamiya RB67, if you have never seen a 120 roll film camera, you will be surprised. If you think: 35/36 pictures on one roll - this is not a lot, you will be even more surprised because:

Note: we are talking about exposures, not pictures/images. As an exposure doesn’t necessarily need to result in a nice picture. I’m usually ending up with 2-3 acceptable pictures in 10 exposures because it is hard to shoot nice pictures with such a device. It makes you think.

The film material we are talking about

The anatomy of the RB67 - by Raphael Borges

The Mamiya consists of (from left to right - bottom to top):

The camera is a bellow-focusing, leaf shuttered, SLR. It is completely mechanical and does not contain/need any battery. As the camera system, it is, it allows to configure it to the users liking.

Here’s a broad explanation of the mentioned components:

I’m running the standard 6x7 revolving back, but one can easily find other backs such as 6x4.5 or 6x8. There is also the option of exposing instant film, that is unfortunately not being produced anymore. Fuji stopped their production of the FP Film series in 2016 as announced here.

I never had the chance to shoot them, and I would love to see a rebirth of the medium.

Just open the film back, switching the off-roll to the on-roll side (meaning you need one empty roll to begin shooting). Loading your new roll, and feeding it across the carrier and exposure side to the take on roll (on-roll). At this step, it’s only important to not overfeed it on the on-roll, otherwise, you might expose your film too early.

An incredible advantage of this type of camera and film backs is that one can walk around with multiple films at once. Changing the back, lets you change the medium you are exposing without rendering the material unusable or having to fill a full roll of film. It’s still enough limitation left to make you creative but gives just the edge one needs. How often did I see the necessity to change from a low ISO to high ISO film, or switch from b&w to color because of changing scenery.

Another advantage I wouldn’t want to miss is the ease of changing between portrait and landscape mode. With a camera as big and heavy as it is, it would be neckbreaking to turn it and trying to shoot landscape. It is impossible. Mamiya just decided to make use of mechanics and allows to turn the back from portrait to landscape and vice versa.

The last component of the back that saved many of my exposures from being messed up, but also cost me a couple of nice shots, is the blindslide. This camera has multiple mechanical stop mechanisms, that prevent you from accidentally exposing your film material. One is the blindslide that can either be used to block your material from being exposed when changing backs or stops you from taking a picture too early. It’s definitely not a point and shoot. You can’t remove the back without sliding the blindslide in place, and you can not take a picture without removing it. A simple concept.

There’s little to talk about, it’s the piece that makes the back move.

The eye of the camera and the most common type of viewfinder of this model. There are also prism viewfinders available, but they are hardly to be found and usually come as an extra piece rather than body + prism. The viewfinder includes a magnification glass, which I find highly useful in order to focus properly with the bellow system.

The body contains most of the mechanical and necessary pieces to make the system a camera as a whole. It contains the mirror, the mechanics that cog it and remove it when exposing, and the bellow used to focus. In contrast to the helical focusing on 35 mm film cameras, the camera moves the whole lens to focus with the bellow extension of the body. This allows to have a wider range while focusing, being able to get very close with a lot of lenses, and being more precise, but needs the photographer to have an eye on the adjustment factors. It is printed on the side of the camera:

The lens - a mamiya/sekor C 90mm focal length with a maximum aparture of 3.8

The body has an RB type bayonet with a lockring system. Each lens of the Mamiya Series comes with a Seiko leaf shutter. Focusing happens by using the bellow system of the body that can expand up to 46 mm. A huge benefit overall is, that being a leaf shutter system, flash sync works at any speed. Something I had to learn the hard way, is the T Mode.

T Mode is what one would need if you want to do long exposures at night.

In contrast to a standard SLRs bulb mode, the T mode stays open until you move the shutter ring or when the shutter cocking lever is pressed slightly. This lead to the one or the other accidental very long exposure. However, it is a highly useful feature too.

The body and the lens must be cocked before attaching, because both systems must be synchronised.

As the lens has the shutter built-in, and most of them are not the fastest lenses on the market, one will need to be very steady when shooting. Most of the shots won’t be handheld. And if not, the body’s mirror flap might be just a touch too much causing a loss in sharpness due to its resulting vibration. A mirror lockup mode is available to avoid this.

The Mamiya-Sekor model I’m using is equipped with a heliopan skylight 1.5 filter which is constructed out of Schott glass with a slight pink tint. It should improve color accuracy and clarity. Generally speaking, I see it more as general protection of the glass of my lens. So far, of the 5 rolls I’ve been shooting with the system since april, only one has been a roll of portra 160. As I’m living in Berlin and 2019 was the 30th anniversary of the fall of the berlin wall, I’ve decided to shoot color at the celebration venue where a lot of colorful pieces of paper have been added to a big art installation.

The initial release/first model from 1970. Well received by professional photographers due to it’s simple and fully mechanical internals. The initial idea was to be an addition to the photographers toolset, not being the main camera. It was supposed to be the supplement of the Mamiya C serie (Twin Lens Reflex) and the Press rangefinders. But it quickly surpassed those models in popularity, maybe because of its flexibility. It became the workhorse of any photographer in the 1970s.

The second iteration and most sold unit. Until today, it remains the camera that is most traded. Because of this, it is a good choice for anyone interested in investing in the system. I was able to purchase my system relatively cheap in April for around 300 €.

The iteration has been sold for a surprisingly long time of 15 years and improved the base model in many ways. The easiest way to identify the S model is to have a look the backs lock and the front of the body. 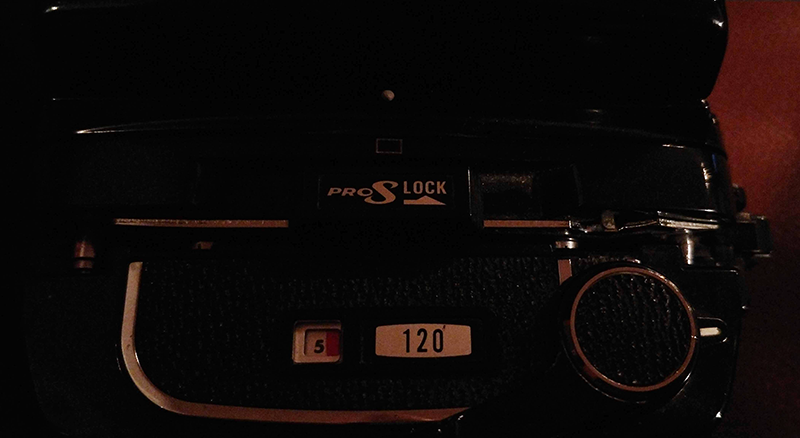 The lenses that came with this series are marked with a C postfix, they require an adapter to be mounted to the SD version of the camera, and are the first lenses to be coated multi-coated.

Another big differentiator is the way how rollback of the film has changed. This influenced the whole workflow of multiexposures, although still possible, the steps have changed. The newer film backs have a lever that sets the film back into multiexposure mode, without this lever, or with a legacy back, you can not create multi exposures with the Pro S.

The orientation indicator in the viewfinder is also new.

According to camera-wiki.org with golden details, and wrapped in brown leather, instead of chrome and black leather, has been released in 1981. Having had my eyes on the market since january, I did not see any GL version popup lately. They are super rare.

The third iteration of the camera was released in 1990 and supported a new set of lenses with much better coating and a 7 mm bigger lens mount diameter. Thus those lenses can not be used on the Pro S or previous version. Other than this, there are only slight changes in this revision and it makes it a hard sell for me. There are only a handful of lenses, and for all others one would need an adapter. Thus it is not worth the hassle to find one.

Useful Guides and Ressources for the Mamiya RB 67